other music festivals in Las Vegas as well as in Chicago, law enforcement authorities said.

Media reports citing law enforcement officials say Paddock reserved two rooms in Chicago overlooking the Lollapalooza festival, which draws hundreds of thousands of music fans yearly, in August. Paddock did not check in to the room and it is unknown whether he was in Chicago that weekend, as first reported by TMZ.

Rooms were also reserved in Paddock’s name in a Las Vegas building that overlooked the Life is Beautiful alternative music festival a week before he attacked a country music festival late Sunday, Sheriff Joseph Lombardo of Clark County said.

Hotel employees at Las Vegas’ Mandalay Bay resort, from where Paddock shot and killed 58 people before killing himself, said that he had specifically requested an upper-floor room with a view of the Route 91 Harvest music festival. 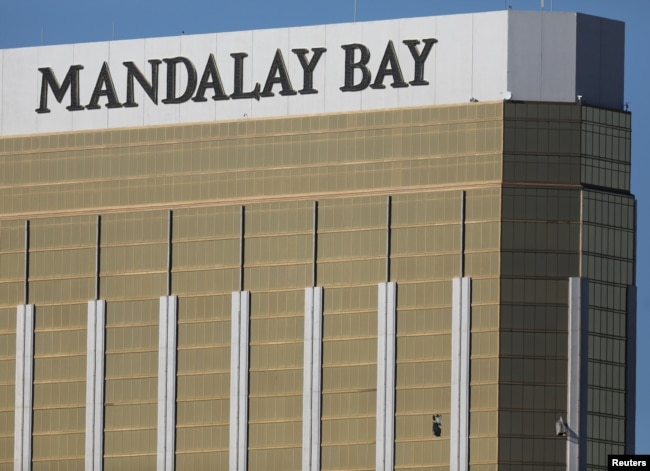 Two broken windows are seen at The Mandalay Bay Resort and Casino following a mass shooting at the Route 91 Festival in Las Vegas, Nevada, Oct. 2, 2017.

Authorities are still searching for a motive for the attack.

“What I saw today is just an incredible tribute to professionalism,” Trump said. “It makes you proud to be an American.”

Trump praised first responders, who said they were able to respond so quickly to the attack because of a new emergency program they had trained in and tested for years.

“Our training paid off. It was much bigger than we ever imagined but we were able to handle it,” Clark County Fire Chief Greg Cassell told reporters Thursday.

Sheriff Lombardo said it is crucial to talk to anyone who knew gunman Paddock in the hunt for possible accomplices.

Meanwhile, the number of wounded in the Sunday night massacre has been lowered from more than 500 to 489. Lombardo said some victims were counted twice in the confusion following the shooting.